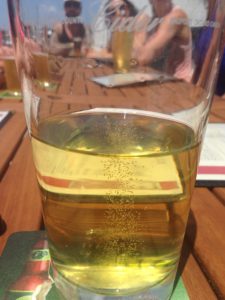 Not that long ago I saw something on Facebook that got my back up.  It was a guy publicly shaming his friend because his friend had turned down a beer because of his “diet”.  I can’t remember the exact words, but it went something like:

“It’s pretty bad when you can’t even buy your buddy a beer because his “diet” is more important than your friendship.”

I wanted to rip a strip off that guy. I mentally wrote a scathing reply chastising HIM for being the unsupportive friend in that equation. I had all sorts of arguments; what if your friend was trying to quit smoking, would you be equally disdainful if he refused to have a cigarette with you?  What if he was an alcoholic and had decided to dry out, then would you throw a hissy fit?   How about if your friend suspected that he had a gluten sensitivity or worse, Celiac disease and he was trying to avoid the gluten in the beer? Would you wish an afternoon of pain and frequent bathroom visits on your friend just to avoid  making YOU feel like he didn’t care about YOU?   In this case, the most likely scenario is that his friend was trying to reach some sort of performance goal and he was eating clean and just didn’t want to mess up his flow with a pint.   I can respect that, but then I’m a nutritionist that’s been on that side of the peer pressure for over a decade.

I know it can be hard for our family and friends to understand why we may want to follow any sort of rigid lifestyle intervention for the sake of our health.  Sometimes they mistakenly take it personally, and that can be very hard.   If you’ve ever been guilted into dessert because it may be your last chance to have a slice of “Aunt Glenda’s pie” then you know what I’m talking about.

The pressure to bow to convention can be downright nasty.  In the facebook example above, it was actually threatening a friendship.  What’s with that?  Why do our lifestyle preferences matter so much to people around us, why is it even a topic of discussion?

I was at a birthday party last year and the guest of honor (jokingly) threw his fork and refused to eat his birthday cake until I ate a bite .I refused because I was doing a 40 day Paleo Reset with my clients and that commitment was more important to me than a forkful of ice cream cake, but it brought SO much attention to what I choose to eat or not eat, that it was the topic of conversation for a good five minutes.  Gawd, if I don’t want to eat a piece of cake why can’t everyone just get over it? Why does it matter?

I have some theories about why it bothers people so much and I’ve developed some strategies to handle the attention and pressure that making healthy choices often subjects us to.  One of my theories is that people are uncomfortable being in the company of someone that isn’t partaking in a behavior that they themselves know isn’t good for them.   If everyone is eating cake there is an unspoken camaraderie in doing the “indulgent thing” together, but if one refrains, the rest feel awkward or like they are being judged somehow.  Let me be perfectly clear here, I eat cake, just not when I’m doing a reset or if I have some other valid health reason NOT to eat cake.  Food is more about chemistry for me and I don’t judge people for having a piece of cake, but many people THINK I do because I’m a nutritionist and it seems to make them very uncomfortable.   I hypothesize that  when I refrain from drinks, food or any activity that I’ve  decided doesn’t support my health in that moment, and the people around me don’t understand my true motivation or intention it somehow makes them feel the need to defend their own actions or choices.  After a while you just get used to it, but it can really suck.  People do treat you differently when you make healthy lifestyle choices and sometimes it’s a lonely place to be.

This issue really comes into play when we consider the concept of Dynamic Balance.  How do we balance our health choices with social gatherings or expectation of friends and family?

Here’s the advice I would give to the friend that didn’t want to have a beer for the sake of his “diet”:

In order to make permanent changes in our lives we may have to change how we spend our time and who we spend it with.  Remember, we’re the average of the five people we spend the most time with.  Choose those people wisely.

Introduction to EFT Tapping from its Inventor: Gary Craig